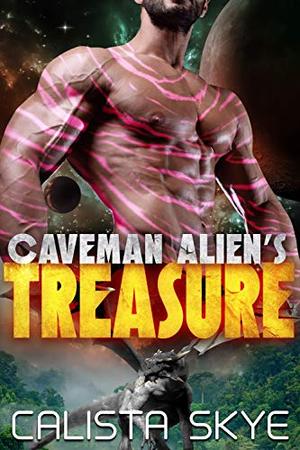 Dolly
I can’t take my eyes off him.
He’s huge, strong and so confident the other cavemen become invisible next to him. His stripes are a vivid pink and his eyes totally black. Whenever he looks at me, my knees threaten to buckle under me from the intensity in his gaze.
I’d love to find out what that darkness is that he’s obviously carrying. The word ‘brooding’ doesn’t even cover it.
But it can’t happen.
He’s a caveman alien with a sword and fangs. I’m a girl from Earth, abducted and placed on this prehistoric dinosaur planet. And all I want is to go home.
We’re just too different.
There’s no chance it could work.

Brank’ox
There are other women in the alien village. But none of them are like her.
She’s sweet and popular and unspeakably beautiful.
She’s my opposite in every way. She doesn’t carry a burden like mine.
I failed this tribe. Nobody talks about it, but it fills my mind every moment
I ache to go over to her, to just give her a smile.
But I don’t deserve even that.
For failures like mine, there’s only one way to pay: I must kill the deadly dragons.
All of them.
And if that means my death, then maybe that’s for the best.

Caveman Alien’s Treasure is the twelfth book in the Caveman Aliens series of science fiction romance novels. The books are complete stories, but should be read in order for maximum enjoyment.

Expect steamy scenes, mysterious aliens with features like adult toys, deadly planets and the love story between a girl from Earth and a sensationally hot and dangerous caveman alien.
more
Amazon Other stores
Bookmark  Rate:

'Caveman Alien's Treasure' is tagged as: