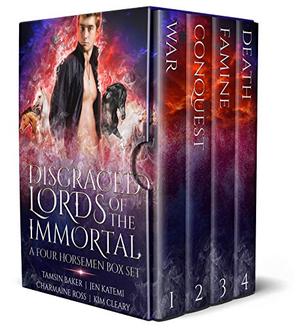 A brand-new take on the Four Horsemen mythology from USA Today and international bestselling authors.

Four unique stories, each featuring a disgraced Lord of the Immortal - War, Conquest, Famine and Death. Take a ride with these wildly seductive heroes as they forge a new path for themselves among mortals, and discover that some human women offer far more than even an immortal Lord has the right to expect.

If you like the action of J R Ward, the steam of Kresley Cole and the brooding heroes of Jeaniene Frost, you'll love Disgraced Lords of the Immortal.

The Color of War by Jen Katemi
How in all the heavens does the Lord of War begin to broker peace?
The color red is all I see. The color of rage. The color of blood when an innocent life drains away into the hot dry earth. Why does our goddess want to save these humans when all they strive for is power and greed, and all they manage is destruction?
What makes the human world worth saving?
When I meet Molly, it’s as if a kaleidoscope of color bursts into my vision. She is everything I never knew a human woman could be – kind, brave and selfless. How can I not step up to protect her?
As Branagan, Lord of War, I am invincible. As Finn Barden in the human world, I might have to risk everything—even my supposedly immortal life—to prove to us both that there is more than one color in the rainbow.

Molly makes the human world worth saving…but at what cost?

A Worthy Conquest by Tamsin Baker
A wealthy rancher and the town’s local doctor are surely a match made in Heaven…or maybe not.
Lord Conquest, one of the Four Horsemen of the Apocalypse, wakes up in Texas, amidst the humans he so detests. But what’s a demi-god meant to do when he finds out he’s the owner of a wealthy ranch, and has everything a man would desire?
Except the love of a good woman.
Enter Dr. Emma Garcia. Emma’s life revolves around her job as a small town doctor. She has a dream to bring rural ambulatory services to the town, but one person stands in her way.
The Sheriff. He’ll do anything to stop her. And he has some paranormal tricks on his side.

Can Conquest fall in love? Can Emma succeed with her dream hospital? Only time will tell.

An Appropriate Penance by Kim Cleary
Being stuck in the mortal world sucks. Being stuck in the mortal world without powers utterly chafes. Having to grovel to the Goddess Danu to go home is downright insulting.
Overall, it’s fair to say the Lord of Famine isn’t impressed with life on Earth but if an apology is what the Goddess wants, an apology she’ll get – no matter if he’s actually sorry or not. Which he isn’t. Of course.
That is, until he comes face to face with a brave and beautiful mechanic caught in the middle of a turf war and his long-withered soul stirs to life after centuries of laying dormant. He can’t live forever in the mortal world, but that apology he needs to make to go home? That’s one thing he can’t say. Not anymore. Not if it means he has to leave the one female he never wants to leave behind.

The Lord of Famine is obligated to protect humanity...but what happens when he’s tempted by the sweet promise of love?

One Day You Will Die by Charmaine Ross
Death has been banished to the mortal plane of Earth and he is not having a good time.
Well, what did he expect when he insulted the all-powerful goddess, Danu? Not only has his horse been replaced with a limo, but his whiskey is now orange juice and his long-dead heart has beat for the first time in millennia—all thanks to a woman with a sunny smile and a past best forgotten.
But Death does remember, and slowly he learns that reaping souls isn’t the chore it has become. There is more to these humans than he ever thought possible.
Then, when he’s called to harvest Sophia’s soul, he has to deny his entire nature.

What happens when Death wants to live?
more
Amazon Other stores
Bookmark  Rate:

'Disgraced Lords of the Immortal: A Four Horsemen Steamy Paranormal Romance Box Set' is tagged as: