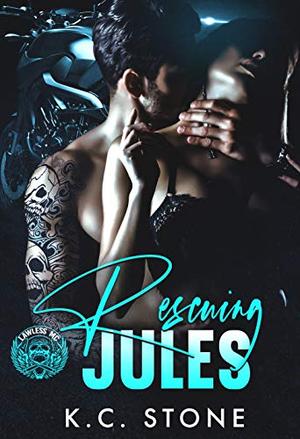 Jules
I live a charmed life as the club princess to the Outlaws MC. I’m practically untouchable and my world is as close to picture perfect as it can get, until one day when everything changes. Within a split second my life goes from normal to catastrophic.
I wake up chained to a floor, in the hands of a psychopath.
My only concern is how I’m supposed to escape this nightmare. Until I realize something terrifying. I’m not the only person in this madman’s clutches . . . and I don’t have the heart to leave them behind. If I’m going to get out, they will too. or I’ll die trying.

Dom
He’s a ruthless savage who won’t approve of what I want. No matter how much I think about making Jules my ol’ lady . . . her father won’t give me his blessing and I know it.
I’m not some random dude, either. I’m the VP of the Lawless MCs local charter. Shit. Everything was fine until I met her. When I did I began to rethink everything about my life.
I hear about Jules being missing and her father’s blessing means nothing to me. Not when I’m in a race against time to save her life.
I only hope I can get to her before it’s too late.
more
Amazon Other stores
Bookmark  Rate:

'Rescuing Jules' is tagged as: