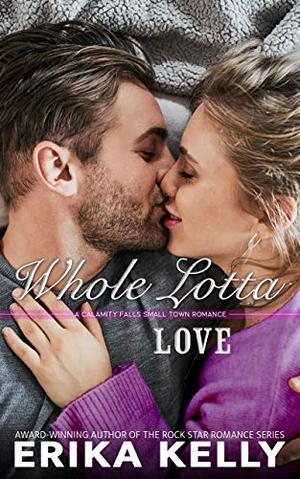 But only because she's not ready to tell her family she got fired from her job running the fanciest restaurant on Maui. Besides, it’s only for a short time—just until she gets a new one.

A week alone in the mountains to hone her signature dishes, an audition for a cooking show…and then she’ll come clean.

Except, when she gets to the cabin, she finds a man wearing nothing but boxers and guzzling tequila. And, with a colossal snowstorm shutting down the roads, it looks like she’s stuck with him.

An injury cut short the quarterback's promising career, and he's the first to admit he’s not handling it well. He doesn't have a Plan B. So, when the hot shot chef shows up at his cabin, he welcomes the distraction. Since he grew up in his mom’s restaurant, he knows a thing or two about cooking, and he’s not sure which is more fun: playing around in the kitchen or annoying the know-it-all with his lowbrow dishes.

Lulu nails her audition. But before she can pop open the champagne in celebration, the producers introduce her to her cohost. Only it’s not a chef.
It’s the washed-up quarterback.

What happens when these enemies become lovers? Heat so hot even the kitchen can’t stand it.
more
Amazon Other stores
Bookmark  Rate:

'Whole Lotta Love' is tagged as: