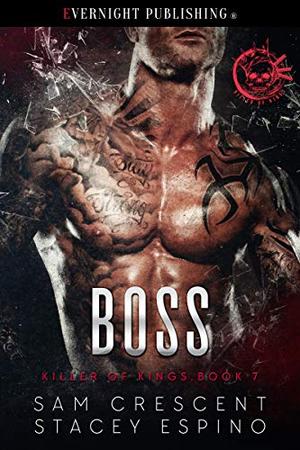 Even the killer of kings can’t hide from love forever…

Boss’s underground empire has a ruthless reputation for getting the job done. He’s at the top of his game, has more money than he could ever spend, and is feared by his enemies. Then why does his life feel so empty? He decides he needs more challenges, so he puts his energy into new contracts while investigating why innocent people around his city are dropping dead by the dozens.

Graciella made a huge mistake and needs to remedy the problem. To finance her mission, she’s forced into a lifelong debt to a madman. Still, she’s more worried about Boss finding out what she’s done. He’s known for doling out swift, brutal justice, and she’s already on his shit list.

They’re forced to team up to find the men behind an evil plot, or one of the Killer of King’s men may not come out alive. Graciella wants to clean up her mess and disappear—but Boss won’t let her slip away so easily. He demands more from her than she’s capable of giving. Not all girls deserve the happily ever after.
more
Amazon Other stores
Bookmark  Rate:

'Boss' is tagged as:

The 'Killer of Kings' series

Buy 'Boss' from the following stores: