Wifed to the Sheikh: A Sheikh Romance Boxed Set 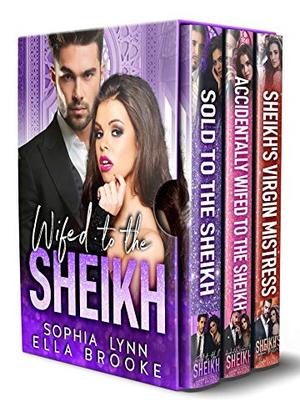 Book One: Accidentally Wifed to the Sheikh

She would be my sheikhess; she just didn’t know it yet.

Pressure.
That was all I felt.
Duty to my country.
To my people
To my borders.
They were my priorities.
Well, and taking a wife to sustain the sheikh succession.

It was by obligation that I succumbed to my advisors.
But it was by choice that I chose her.

Her innocence had been too enticing.
Straight-laced.
A good girl.
With long black hair,
C@#k twitching green eyes,
And curves that a man would never tire of…

Hmm, what devil could resist such an angel.

To my surprise, she went with the engagement –
Said she thought it was time to “take a walk on the wild side.”
My delicate American flower bloomed for me,
Over and over again.

Until our temporary “whirlwind romance” hit the rails.
A pregnancy.
Unplanned.

But what Nat doesn’t realize now is that blood to a sheikh is sacred.
She will bear my child.
She will remain my sheikhess.
There will be no further negotiations…

Book Two: Sold to the Sheikh

She was collateral damage… And now she belongs to me.

I have always been a man who takes risks.
Where is the fun otherwise?
Despite my position as Sheikh,
I don’t shy away from the action.
Or from personally detaining those who try to undermine my rule.

But, unfortunately, sometimes the innocent get caught in the crossfire.
And little Jane Larson is a prime example.

And that shyness,
That innocuous compassion—
Who wouldn’t want to corrupt that?

Thus, I struck a deal with her criminal father:
He goes free,
And Jane becomes mine.

Only, such sweet spoils of war weren’t meant to be so…
Ensnaring.

Now, the woman has me on my knees,
And she knows it.
Her only mistake?
Going behind my back and making another deal with Daddy dearest.

Well, think again, little Jane,
Because a mistress must always obey her Sheikh…

I was a powerful sheikh; she was a delicate rose ready to be plucked.

I was always a formidable man.
I had an empire.
My country’s loyalty.
Ambition.
Prestige.
Treasures.

It was by chance that I met her.
Laurel Phillips:
Young, pretty, shy, curvy, American.
She was the “Angel of Grace” who came to my aid,
And for that,
She had my gratitude.

But that wasn’t all she had…

One night was all it took;
I made her mine,
Over and over again.
Little had I known that she was a virgin…
Yet that only made my desire for her ripen.

At my palace, Laurel had everything.
It was a sweet deal;
Her company for my riches—
Until politics got in the way.

Now, a rival of mine has kidnapped her to force my governing hand.
Well, good luck to the fool,
Because no one steals my intended sheikess without paying a brutal price…

'Wifed to the Sheikh: A Sheikh Romance Boxed Set' is tagged as:

Similar books to 'Wifed to the Sheikh: A Sheikh Romance Boxed Set'

More books like 'Wifed to the Sheikh: A Sheikh Romance Boxed Set'   ❯

Buy 'Wifed to the Sheikh: A Sheikh Romance Boxed Set' from the following stores: