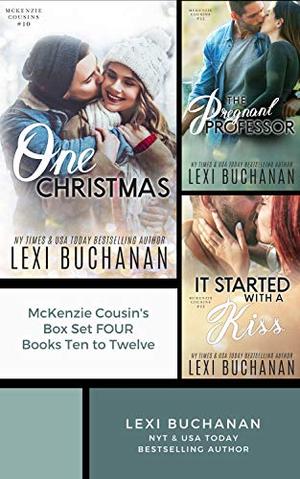 Three books in one volume

Alexander McKenzie is one of the quieter cousins, which is why he suffers in
silence over his secret love for his beautiful cousin, Rachel. He needs her but
knows he can’t have her. So out of his love for his family, he pushes her away,
breaking both of their hearts in the process.

Rachel McKenzie wasn’t born into the McKenzie family; she was adopted into
it. She’s strong willed and doesn’t see why she can’t spend the rest of her life
with Alexander.

Knowing she is leading with her heart instead of her head, Madison McKenzie
accepts a job offer from Derek Jackson that sees her heading for an extended
stay on his ranch. He’s everything she shouldn’t be attracted to, but the older
man has slipped into her heart.

Derek Jackson has been alone for a long time and he certainly isn’t going to
start going after a woman the same age as his son. So why did he offer
Madison a job knowing that she would have to spend time living on his ranch?

Princess and the Puck #06

Paige McKenzie no longer dreams about having a husband and two-point-five
children, a dog, and a white picket fence, those dreams died when the doctor
told her she was sick.

Now she’s in recovery all she wants is to be left alone to heal. Except Seth
Reynolds refuses to let her fall into the deep depression he senses under the
surface. He seems to think he knows her better than anyone, and maybe he
does.

His Princess isn’t going to know what’s hit her when he gives her his Puck!
more
Amazon Other stores
Bookmark  Rate: