Circle of Light (The Light-Years Trilogy #1) 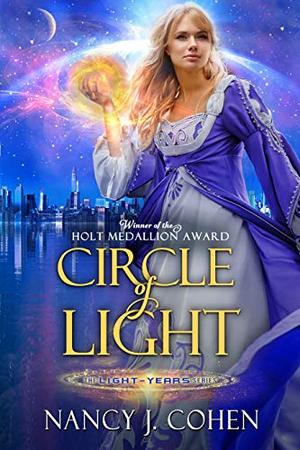 A reluctant bride… A dispassionate groom… A gallant starship captain. Can they combine forces to save the galaxy?

Attorney Sarina Bretton believes in facts, not fantasy, at least until Captain Teir Reylock of the Coalition Defense League kidnaps her from Earth. His mission is to deliver her to the High Council for her marriage to Lord Cam’brii, a member of the ruling council. It is through this union that she will become the legendary Great Healer and save the galaxy from a devastating plague.

At the capital city of Bimordus Two, Sarina discovers the wonders of an advanced civilization. She also awakens to her desire for Captain Reylock, who has been assigned as her personal bodyguard. Meanwhile, danger follows the betrothed couple as enemies try to prevent their marriage from taking place.

Teir admires the feisty Earth woman, but he is sworn to duty. Not only must he protect Sarina from the Coalition’s enemies, but he must guard his heart against her charms. Drawn together by passion but torn apart by destiny, these star-crossed lovers must overcome their obstacles until the final shocking revelations expose the legend’s truth.

Winner of the 1995 HOLT Medallion Award

“Nancy Cohen sparks your imagination and melts your heart with her wonderful tale of galactic adventure and star-crossed lovers.” Marilyn Campbell, award-winning author of Lovers in Time and The Innerworld Affairs series
more
Amazon Other stores
Bookmark  Rate:

'Circle of Light' is tagged as:

The 'The Light-Years Trilogy' series

Similar books to 'Circle of Light'

Buy 'Circle of Light' from the following stores: