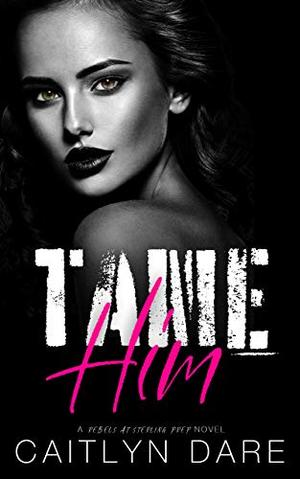 Remi Tanner was only supposed to be a pawn in my game. But I screwed up. I broke her. And now I have to find a way to fix it.

I want her.
I need her.
In the end, I’ll prove she’s the only thing that matters.

Ace Jagger wasn’t supposed to imprint himself on my heart. But he did, before he tore it from my chest and hurt me in the worst possible way.

He’s possessive.
Dangerous.
In the end, I’m not sure I can resist.

He might be the bad boy with no conscience, and I might the girl with nothing left to lose, but one thing’s for sure... He won’t stop until gets what he wants.

Tame Him is the second book in the Rebels at Sterling Prep series. It is a dark high school bully romance. If possessive, tattooed, motorcycle-riding alphaholes aren't your thing, you probably won't like this book!
more
Amazon Other stores
Bookmark  Rate:

'Tame Him: A Dark High School Bully Romance' is tagged as:

The 'Rebels At Sterling Prep' series

All books by Caitlyn Dare  ❯

Buy 'Tame Him: A Dark High School Bully Romance' from the following stores: