Claiming the Crystal (The Platinum Society #3) 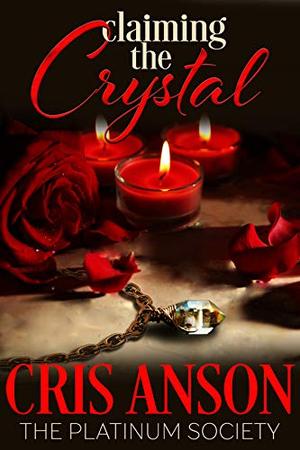 Ex-Marine and bar-owner Soren, the quiet loner of the Thorvald brothers, reluctantly offers himself at a Take a Bachelor to Dinner Auction for charity. The minx who “won” him seems to be hiding under the table, so a humiliated and angry Soren hoists her over his shoulder and storms from the ballroom.

So begins a rocky love affair between two unlikely people.

When thirty-year old Crystal D’Angelo’s talisman tells her that Soren is The One she’s been waiting for, she’s ready to give him everything: heart, soul…chastity.

Soren, whose “man-woman skills” are almost nonexistent, finds he is unable to stay away from the innocent but sensual Crystal, who unleashes a carnal side of him he never knew existed.

But convincing Soren—who learned as a child that love hurts, and no woman can be trusted with his heart—that what she feels for him is about more than magic, is a tough battle she won’t give up on.

As things heat up between them, a psychotic stalker takes exception to Crystal’s relationship with Soren and violently turns her world upside down.
more
Amazon Other stores
Bookmark  Rate:

'Claiming the Crystal' is tagged as:

The 'The Platinum Society' series

Similar books to 'Claiming the Crystal'

All books by Cris Anson  ❯

Buy 'Claiming the Crystal' from the following stores: