That's Just What Gangstas Do 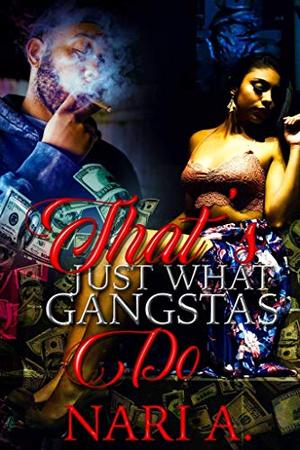 Char’Lee Raine Moore, isn’t your average twenty-year-old. Usually, your twenties are filled with a bunch of wild nights and pure excitement. That isn’t the case for, Char’Lee though. Becoming a mother as a teenager has forced her to grow up way before her time. Instead of letting that stop her, she only went harder to provide a decent life for her child. Times were not always easy for young, Char’Lee, especially without the help of her son’s father, Byson. Bryson was the love of her young life, or so she thought. When he found out they would be having a child at the age of sixteen, he basically cut her out of his life, breaking her heart.

From that moment on, she swore that she would focus on herself and her son, and she did just that. Dating and running the streets were the furthest thing from her mind, but that all changed with just one night out. When Char’Lee meets Dezmond Grand, she instantly is found attracted to his romantically rude personality.

Dezmond showed Char’Lee what the word, fun actually meant. He was such a thrill for her that she decided to look past his player ways one too many times. It didn’t matter to her because they were only having fun… right? At least that’s what she tries to convince herself to hide her true feelings. Char’Lee, would love nothing more than to be, Dezmond’s one and only, but how much is one girl supposed to take?

Tired of waiting around for, Dezmond to make up his mind, Char’Lee began living her best life. When she crosses paths with the mysterious, rugged, Marcus Deas, he easily swept her off her feet. Marcus, unlike Dezmond, knew exactly what he wanted, and that’s Char’Lee. He showed her that not all men are the same and if she let him, he could love her properly. Although, Char’Lee was falling for Marcus in every way, the heart wants what the heart wants and for her that’s, Dezmond…Or so she thought.

With two men, who she’s grown to love, both tugging at her heart, will Char’lee be able to choose just one? Will, Dezmond finally get his act together and see that, Char’Lee won’t continue to put up with his shit? Will, Marcus continue to chase after a torn woman, or will they all walk away with a broken heart?
more
Amazon Other stores
Bookmark  Rate:

'That's Just What Gangstas Do' is tagged as:

Similar books to 'That's Just What Gangstas Do'

More books like 'That's Just What Gangstas Do'   ❯

Recent books by Nari A

Buy 'That's Just What Gangstas Do' from the following stores: