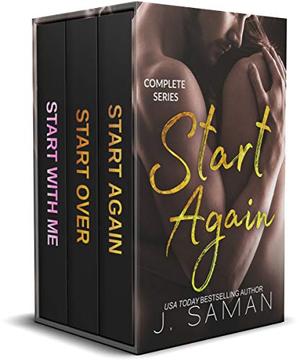 A sexy billionaire who fights for the woman of his dreams.
A reformed hacker desperate for his second chance with the one who got away
A broken lawyer who falls for the one woman he shouldn't.
Three tantalizing full-length standalones with all the heat and feels you’re looking for.

Start Again
One night. One accident. And her life was forever changed.
Kate Taylor is searching for a way out.
A fresh start to finally put her haunting past to rest.
Out of options and willing to try just about anything, she sets off on a road trip across the country.That is until she encounters Ryan Grant, the irresistibly sexy and mysterious stranger with a past of his own.
One kiss, one touch and she’s giving into everything she swore she wouldn’t.
Rules are broken.
Attraction is turning to love.
And Kate’s heart is once again on the line.
But when what she’s been running from catches up with her, will Ryan be able to forgive her for the choices she makes?

Start Over
One decision changed his entire life. And he's been paying for it ever since.
Seattle felt like the perfect place for Luke Walker to hide.
A reformed hacker who now fights for the other side, he’s a country onto himself.
Especially since his past is never far behind.
But when he sees Ivy Green again, the woman he was never able to forget, he wants her. For so much more than the one-night stand they had ten years ago.
It doesn't matter that his dark past and dangerous present mean he can't keep her.
That his secrets would destroy any shot at a real future.
After all, she's leaving in a month.
What’s the worst that can happen?

Start With Me
No relationships. No falling in love.
Those are Claire Sullivan’s rules. Simple. Easy. Uncomplicated.
Then Kyle Grant walks into her life and tries to mess all that up with his GQ model looks, irresistible charm and cocky, take-no-prisoners swagger.
Despite all that, she is determined to keep him snugly in the friend-zone.
Some secrets are just too dark to overcome and hers is certainly not the exception.
But when life and fate step in, Kyle decides he no longer cares about any of Claire's rules.
After all, rules are made to be broken.
Now she has to find a way to stop the man who is stubbornly trying to win her heart.
Not so easily done when she’s desperate to give it to him.

This box set contains the three full-length novels in the bestselling Start Again series that has been called addictive and unbelievably sexy! Download now to get lost in this incredible world of billionaires, love, loss, steam, friendship, and second chances!
more
Amazon Other stores
Bookmark  Rate:

All books by J. Saman  ❯