Put A Spell On Me 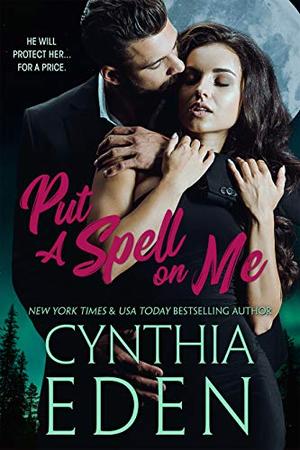 Serena Tyme is a witch in trouble, serious trouble. The kind of trouble that gets you killed. Someone is trying to bind her powers and make her helpless. Since she’s not in the mood to be helpless, Serena works a dark spell and summons a very unlikely protector…

He hunts. He kills. He lives forever.

Luis D’Amil isn’t your typical good guy. Mostly because he’s not good. He’s an immortal soul hunter. He has all the powers of a demon and the strength of a witch, and he doesn’t bow to anyone’s command. He’s the boogeyman, the creature that people always fear in the dark.

She thinks that because she summoned him, she can control him. She’s wrong.

No one can control Luis, but he does agree to help Serena. Mostly because the idea of anyone hurting her enrages him. After centuries of being alone and feeling nothing, the feisty witch has managed to break past his defenses. So, yes, he’ll help her. He’ll find the enemies trying to destroy her, but there will be a price.

The price is her. Luis intends to claim his witch…and keep her, forever.

Provided, of course, he can convince Serena to give her heart to a man who destroys souls…

Who said life was easy?

Author’s Note: Luis D’Amil is dangerous, gorgeous, and, yes, he might be on the bad side, but even soul hunters can fall in love. Well, maybe. When he meets Serena, Luis knows that he will never be able to let her go. This is a short and steamy novella (32,000 words) of paranormal romance. Lust comes fast and first, but hold on tight because the danger will soon follow. Don’t worry, there’s a HEA. I got you covered. Spooky spell casting, sizzling scenes, and hot romance. Bam.

PUT A SPELL ON ME was originally released in September 2008 as part of the EVERLASTING BAD BOYS anthology (back then, the novella had the title of SPELLBOUND). I’ve revised and updated the story, and now Luis is ready to take you on a sexy supernatural adventure. You’re not afraid of monsters, are you? Because the creatures that hide in the dark aren’t always bad. Sometimes, they’re just…hot. Have fun and dive in!
more
Amazon Other stores
Bookmark  Rate:

Similar books to 'Put A Spell On Me'

Buy 'Put A Spell On Me' from the following stores: