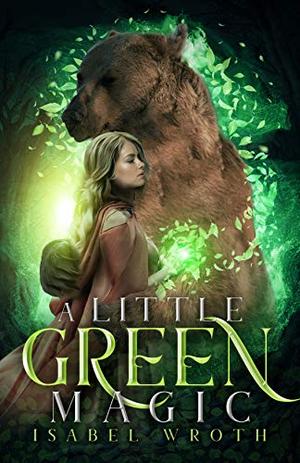 “You've shown about as much aptitude for magic as a human. It’s time to venture out and find your place in this world.”

Three years ago, those had been the damning words that banished Ivy Greene from the only home she’d ever known. She would have been completely alone if not for her friends and their determination to stay together. Unable to contribute magically to the coven, Ivy takes a job at a local garden store. She likes it there, she’s done well, and the view is unBEARably gorgeous.

Ivy is beautiful and everything that keeps Uriah up at night, but it’s against the law for humans and shifters to mate. Uriah Tremarc has kept his distance for two years, terrified his love for her will get her killed. In a random twist of fate, he discovers she’s a witch, and now all bets are off.

Ivy discovers she’s not as powerless as she’s been told, but the discovery comes with a warning.
Someone is coming for her.
Ivy only has A Little Green Magic, but she’s found her place in the world, and with Uriah by her side, she’s not about to let her mother’s murderer wreck her happy ever after.

HEA
NO CLIFFHANGERS
NO CHEATING
NO TRIGGERS

Should you find grammatical errors, reach out to the author at isabelwroththewriter@gmail.com and allow her the opportunity to fix them before reporting quality issues to Zon.
more
Amazon Other stores
Bookmark  Rate:

'A Little Green Magic' is tagged as:

The 'The Little Coven' series

All books by Isabel Wroth  ❯

Buy 'A Little Green Magic' from the following stores: