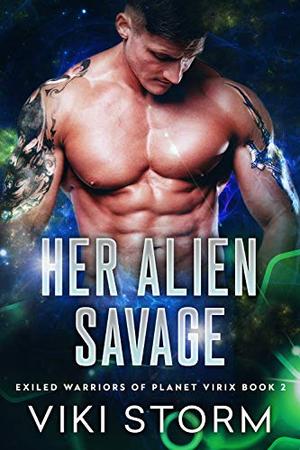 LYNA
I'm a lone female Investigator, deployed on a secret mission to the flesh markets of Narelerth when everything goes wrong.

Within minutes, I'm put in chains and hauled up to the auction block.

Now my worst nightmare has happened. I'm taken by an alien warrior. He's completely wild, untamed. He carries me to his ship and I'm shocked by the force of my own desire. As much as I try to resist, I can't deny the power of his touch. His savagery thrills me in a way I didn't expect... but he's a monster, with claws, fangs and strange yellow eyes that seem to peer into my soul.

And now this beast owns me...

YEV
I've never cared about the fate of humans. Until I see her at the flesh-auction. A small, helpless female is about to be sold to the highest bidder.

She's chained, half-nude, but won't give in to fear. She holds her head high and spits at her captor. Something inside me wakes. I know instantly that she's my fated mate.

I lose it. I go berserk, unleashing the full force of my warrior fury on the slavers.

I'll protect my sweet little human to my last breath, if only I can get her to trust me.

One taste of my mate makes me forget I'm supposed to be on a job. The Universe might have to save itself this time...

This book is a standalone, no cliffhanger and HEA guaranteed! You don't have to read Book 1 first (although it might be more fun if you do)
more
Amazon Other stores
Bookmark  Rate:

'Her Alien Savage' is tagged as:

Similar books to 'Her Alien Savage'

All books by Viki Storm  ❯

Buy 'Her Alien Savage' from the following stores: