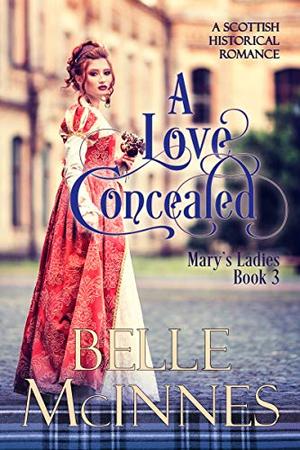 Mary Queen of Scots may reign, but villainous plotters have designs on her throne...

Held captive during her teens by an evil lord, beautiful heiress Margaret Carwood uses her wits and ingenuity to escape his clutches, becoming Mary Queen of Scots' favoured lady-in-waiting in the process. With her future secure, she's fiercely determined never to be dominated by a man again, and convinced that she doesn't need to marry to be happy.

Descended from Robert the Bruce, Highland laird John Stewart is just as tenacious—and stubborn—as his illustrious ancestor. When tragedy hits his ancestral home, he comes south to seek his fortune at the royal court in Edinburgh.

The queen's household is a place of drama and intrigue, where people wear masks for entertainment—and to cover their real motivations. Thrown together by a matchmaking queen, John discovers that Margaret is one of the few ladies he can trust to speak her mind—even if it means that their arguments are regular and heated.

But when he gets caught up in the machinations of villainous plotters, John finds himself in the wrong place at the wrong time. It’s a mistake that could cost him his reputation—or his life.
more
Amazon Other stores
Bookmark  Rate:

'A Love Concealed: A Scottish Historical Romance' is tagged as:

Similar books to 'A Love Concealed: A Scottish Historical Romance'

All books by Belle McInnes  ❯

Buy 'A Love Concealed: A Scottish Historical Romance' from the following stores: