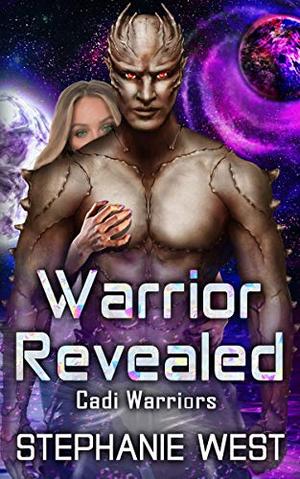 After the week Nadzia had, she was on the verge of a mental breakdown. Learning aliens exist was freaky enough, let alone being chased and imprisoned by her own paranoid government. Then her baby sister decided to go live on a foreign planet, and her dad was nearly killed by a missile strike. It was enough to bring her to her knees.

Aculus, a bone-armored warrior, proved to be her lifeline. He saved her more than once, and assured her he had the ability to heal her dad on his home world. Aculus even reunited her with the sister she thought died in a plane crash. Putting up with the hopeless flirt and total bonehead as they traveled across the cosmos was a small price to pay for such miracles.

When Aculus met the delicate beauty, she was wounded and afraid, instantly inciting his protective side. But Nadzia swiftly put him in his place, making him laugh with her spirited retorts. Then he discovered she was the only one who could strip away his armor, revealing the male within. He should’ve been overjoyed to find the female every Osivoire male hunts for, his weakness; except the timing couldn’t be worse. Nadzia was courageous, but she’d need more than her brazen wit to survive, if the Conclave discovered she was his mate.

Somewhere between Earth and Osi, amidst their sarcastic banter, Nadzia falls in love with Aculus.

Is she brave enough to take a chance on love?

Can she prove to Aculus and everyone else she’s more than some weak human?

To hold onto the man she loves, Nadzia will have to dig deep and unleash her inner warrior.

'Warrior Revealed' is tagged as:

All books by Stephanie West  ❯