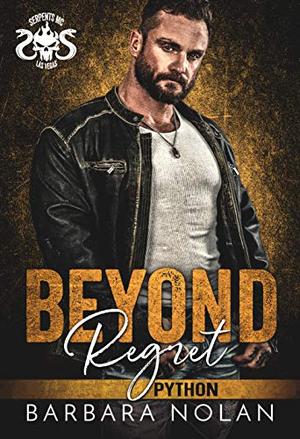 Python has enough crazy in his life. Running Ecstasy, a high-end strip club for the Serpents, the random women that warm his bed, and the bookie breathing down his neck is more than the six-foot-five biker can handle. Until Virginia stumbles into his life.
Virginia Swanson, the Channel 8 TV reporter, hit Las Vegas wanting to make a name for herself in the fickle world of news reporting. Desperate to leave her influential family in Beverly Hills, she’s determined to make it on her own. She hopes interviewing Python about the Serpents MC is the breakout story that shoots her career to the top.
A case of mistaken identity drops Virginia into Python’s apartment while he’s celebrating his birthday, in his bedroom, with two other women. The flush in Virginia’s cheeks, and the way the petite blonde stumbles out of his bedroom on her spike heels makes him smile.
The sight of Python’s muscled, tatted body invades Virginia’s dreams with fantasies. All of them with her in the starring role, but falling for the rough-edged Sergeant at Arms, isn’t part of Virginia’s plan—Until. These two opposites are thrown together again, and a night of sheet-gripping, lip biting passion ignites a thirst neither can quench, but the timing is all wrong.
Python’s dealing with a whacko president of a rival MC, and a vindictive bookie who wants his fifty grand. So to keep Virginia safe, Python pushes her away.
Virginia has some secrets of her own, and when Python’s life spirals out of control she may be the only one who can save him, even if it means giving up her new life in Vegas and returning to an existence she detested.
Can Virginia come to Python’s rescue in time, and prove to him that she’s tougher than she appears? Or will Python conquer his demons both tangible and internal, and bring them both to a place Beyond Regret.
more
Amazon Other stores
Bookmark  Rate:

'Beyond Regret/Python' is tagged as:

Similar books to 'Beyond Regret/Python'

Buy 'Beyond Regret/Python' from the following stores: