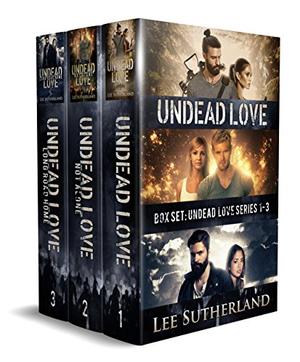 Where passion meets the apocalypse. Gritty, dark, and sexy! The complete trilogy in one box set!

Rus would have preferred to die in the apocalypse, but he made a promise to stay alive. But staying alive isn’t the same as living. For the past year, Rus has shied away from the outside world, avoiding humanity and brooding in the tragedy of his former life.

When Polly, the young and fearless wild-card, stumbles upon Rus while out scavenging for supplies, her instincts tell her to run. But she quickly discovers that in a world crawling with death, there is something about this man that makes her feel alive.

As her walls slowly crumble, Rus believes the world might have something left to offer besides death. If they can survive.

Undead Love: Not Alone
The apocalypse tore them apart. Fate brought them back together.

In those two years, Connor’s only focus has been keeping his family safe. When hope seemed lost, he turned their small farmhouse into a fortress from the undead. Forced to become a leader at a young age, he rose to the challenge of protecting those who lived behind his walls. But when Juliet shows up out of nowhere, Connor wonders if there might be more to life than just surviving.

When Juliet and her father find themselves on the run from the dangerous men who overtook their former camp, they find safety in the last place she expected—the makeshift fortress of a former flame. For the first time, she actually feels safe. As she spends more time with Conner, it doesn’t take long for old feelings to come rushing back.

But good things never last, and she quickly learns that the past has a way of rearing its ugly head.

Undead Love: Long Road Home
Ares is the most eligible bachelor in Los Angeles, but that’s only because most of the city’s ten million inhabitants are now the walking dead. He’s a bouncer with a penchant for fighting and a dark sense of humor. While searching for supplies, Ares stumbles upon Emilia, who’s sassy, sarcastic and in desperate need of his help.

Emilia refuses to die alone in the city so she enlists the help of the only man she knows. She is less than thrilled by his crass humor and abrasive personality, but Ares is a survivor and her only hope of reuniting with her family. Never one to turn down an adventure, Ares agrees to do whatever it takes to get Emilia home safely.

The long journey home is daunting. Sometimes the best place to get to know someone is on the open road, but first they have to make it out of the city…

All books by Lee Sutherland  ❯