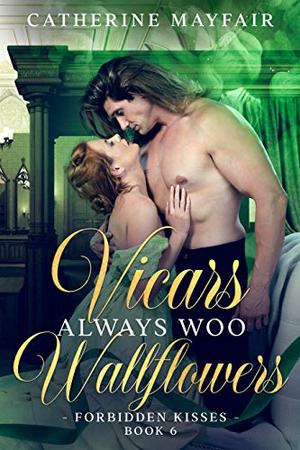 At the age of seventeen, after the loss of her father, Miss Honora Stanhope is sent by the church to Lord Edwin Rowe, a viscount willing to accept the position of guardian for the young woman. At first, Lord Rowe is kind, but once she turns eighteen, he begins to look at her as much more than his ward.

Though Honora wishes to one day fall in love, it is certainly not with this man. His growing advances make the wallflower uncomfortable and she flees to the safety of the church.

Luke Dunford, known to most as Vicar Luke, has dedicated his life working for the infamous Man in Black in order to clear his conscience and to help those in need. Though his friends have found love and are now married, Luke fears he will grow old alone. When a former mentor asks for his help in escorting Honora to a place of refuge, Luke readily accepts in hopes of finding the redemption he has desired for so long.

As Luke and Honora make their way North, they find an attraction to one another neither expected. For Luke, the alluring Honora tempts him at every turn. The slight touches and innocent looks from the wallflower have him debating whether he can control himself and complete his mission.

As Honora learns more about the gentle giant, she finds new desires overtaking her and a wonderful feeling in her heart. It does not take long before she realizes the danger they flee may not be the only obstacle she will need to overcome.
more
Amazon Other stores
Bookmark  Rate: