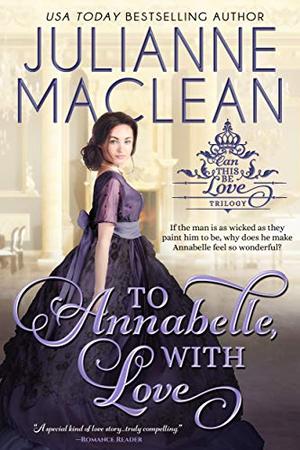 Return to the glittering world of Julianne MacLean’s popular American Heiress Trilogy with this romantic, emotionally powerful spin-off series—Can This Be Love

If the man is as wicked as they paint him to be, why does he make Annabelle feel so wonderful?

Annabelle Lawson knew nothing about the handsome and charismatic stranger she met on the train—only that he would make an ideal model for the budding young artist—and that she desired him more than she ever believed possible. She is soon lured into a passionate and romantic summer affair, but after she is seduced, she learns that she'd also been betrayed.
The man she thought she loved was really Magnus Wallis—a scoundrel like his father before him, the loathed and vengeful cousin of Annabelle's benefactor, the honorable Earl of Whitby.

Older and wiser, no longer the naïve, romantic girl who would fall for a rogue, Annabelle cannot avoid a reunion with Magnus, who wants to include her paintings in his new London gallery. She means to show him her coldest face—but upon seeing him again, her every intention melts from the heat of his touch. It is clear that Magnus still burns for her, but is he the villain he once was, or can he be redeemed and become a man Annabelle could dare to love?
more
Amazon Other stores
Bookmark  Rate:

'To Annabelle, With Love (Can This Be Love (American Heiress Spinoff) Book 2)' is tagged as:

The 'Can This Be Love' series

Similar books to 'To Annabelle, With Love (Can This Be Love (American Heiress Spinoff) Book 2)'

More books like 'To Annabelle, With Love (Can This Be Love (American Heiress Spinoff) Book 2)'   ❯

All books by Julianne MacLean  ❯

Buy 'To Annabelle, With Love (Can This Be Love (American Heiress Spinoff) Book 2)' from the following stores: