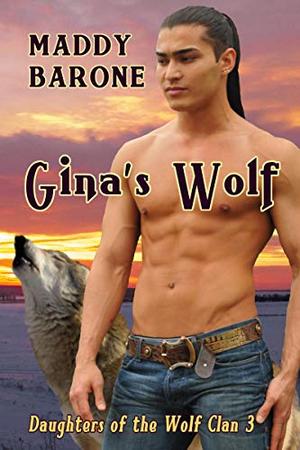 n a dystopian future, Gina Summer’s stepfather is a dictator. Literally. He is the ruthless and cruel President of Kansas-Missouri. He and his army have brutally conquered dozens of cities, which he rules with an iron fist. He rules Gina the same way, telling her what to wear, what to say, and who to marry.
.
Gina wants nothing more than to escape his control and live her life on her own terms. Why can’t she have a husband who loves her because of who she is, not because of who her stepfather is?

She’d almost had that once. After running away from her stepfather, she hid herself in Omaha. It was there she met Cole Wolfe, a handsome native American man who claimed that one, he was a werewolf, and two, she was his mate. He was bossy, supremely self-confident, and sure he knew what was best for her. Gina had had enough of controlling men, thank you very much. But when her stepfather and his army came looking for her, the wolf swore he would keep her safe at his pack’s den to the west. Any escape was better than being captured by her stepfather, so Gina reluctantly followed Cole onto the train. Gina thought her dream of freedom was coming true.

That dream was shattered when her stepfather’s men stopped the train, put a bullet in Cole’s head, and dragged Gina back to her stepfather’s unforgiving arms. She had come so close to escape, only to have a man who seemed to honestly care about her murdered before her. Maybe she would have loved Cole someday. Now, it was impossible.

But the word impossible is not in a werewolf’s vocabulary. A bullet in the brain is not enough to kill a wolf determined to claim his mate. Cole is going to get Gina back. He knows she doesn’t love him yet. He just has to bring her home to the Pack where he can take his time proving how precious she is to him. But first he has to rescue her, win the war between Omaha and Kansas-Missouri, and end the reign of her ruthless stepfather. Compared to that, winning the love of his mate should be easy.

'Gina's Wolf' is tagged as:

The 'Daughters of the Wolf Clan' series