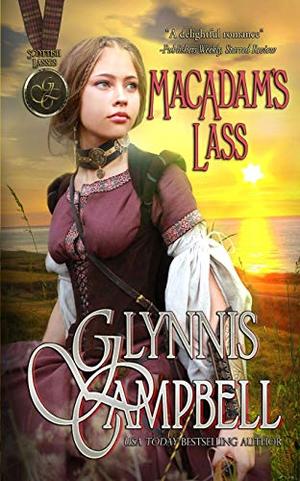 Meet the lasses in the world of Mary Queen of Scots...Like the Scottish thistle, they're lovely yet tough, beautiful yet prickly, and only the strongest and wisest heroes are able to elude their thorns to discover the tender blossom within.

A woman with a legacy...a man with a secret. She seeks to avenge her brave mother's murder. He seeks to reconcile himself to his father's death.

Josselin Ancrum, a sword-wielding Scottish war-orphan-turned-spy for Queen Mary, has her eye on Drew MacAdam. She suspects the golfing "Highlander" isn't quite who he claims to be. While she serves up secret messages in the guise of a tavern wench, he seems to be courting the enemy English when he isn't beating the Scots at their own game. Drawn together by fate, Drew and Jossy are swept up in their growing desires and the designs of their warring queens, until they uncover the terrible secret that binds their star-crossed souls.

Book Details
A full-length novel originally published by Hachette, Inc.
Originally written as "Seduced by Destiny" by Kira Morgan
Revised by the author in 2014
R-rated for sensual passages
Fascinating peek into the history of golf
Editorial Reviews..".a delightful romance set in 16th-century Scotland....Readers weary of Scottish romance cliches will be thrilled to see these cheeky commoners trading blows and puns far away from drafty castles." --Publishers Weekly, Starred Review

..".cocky sarcasm and hilarious wit into every tormented turn, a more winning combination can't be found...so rare and singularly satisfying, that every word really deserves to be savored."--Romance Junkies

All books by Glynnis Campbell  ❯