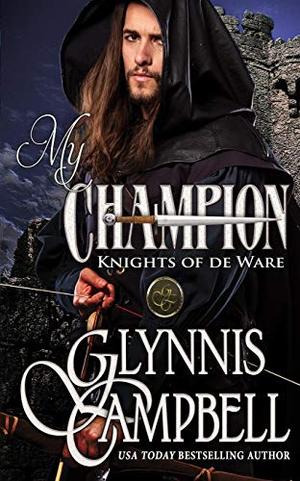 The Knights of de Ware...From a long line of legendary warriors come three brothers to carry on the rich and powerful de Ware legacy:  Duncan the Champion...Holden the Warrior...Garth the Hero...

Sir Duncan de Ware is a sworn champion of the common man and a master of disguise.  So when he finds plucky maiden-in-distress Linet de Montfort facing off against a notorious pirate, noble Duncan goes undercover to come to her rescue, despite her insistence that she can take care of herself.  When the pirate abducts her, Duncan and Linet are caught up in a breathless adventure of danger and romance on the high seas.  And soon Linet realizes her only hope is to trust her mysterious hero—with her life and her heart.

The Knights of de Ware
MY CHAMPION
MY WARRIOR
MY HERO

When she's not writing swashbuckling historical romances and playing medieval matchmaker, USA Today bestselling author Glynnis Campbell is a cartoon voice, the wife of a rock star, and the mother of two young adults. She's been a ballerina, a typographer, a film composer, a piano player, a singer in an all-girl rock band, and a voice in those violent video games you won't let your kids play. She does her best writing on cruise ships, in Scottish castles, on her husband's tour bus, and at home in her sunny southern California garden. Glynnis loves transporting readers to a place where the bold heroes have endearing flaws, the women are stronger than they look, the land is lush and untamed, and chivalry is far from dead!

I love writing "stories to keep you up all night"!

'My Champion (Knights of de Ware)' is tagged as:

The 'Knights of de Ware' series

Similar books to 'My Champion (Knights of de Ware)'

More books like 'My Champion (Knights of de Ware)'   ❯

All books by Glynnis Campbell  ❯

Buy 'My Champion (Knights of de Ware)' from the following stores: