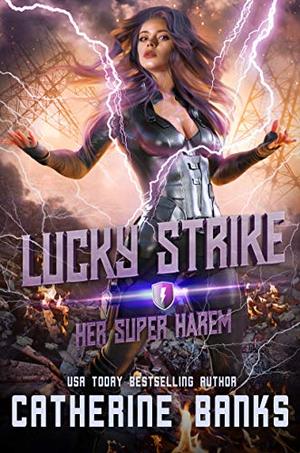 I promised I’d never again wait to be saved. I’d become a hero. But first, I needed to survive.

Being a hero’s girlfriend isn’t really all it’s cracked up to be; especially when most of my free time is spent being kidnapped.

My life had been broken down into a redundant and boring routine of abductions, rescues, and overinflated egos before I took an involuntary swim in a giant health code violation.

Life was black and white to me then, but now? It’s a grey area.

Between monster invasions, conspiracies, and juggling my own core values, I’ll need all the support I can get. But who can I trust?

Something is amiss in the Association - a threat to the virtues and morals all heroes are sworn to uphold. I’m determined to expose it… Or them.

With three dashing heroes and a handsome villain by my side, there’s no way I can fail. The people, the heroes, and the world all depend on our success. It doesn’t mean it’s going to be easy. But then, they don’t call me Lucky for nothing.

Caution: This book is filled with heroes, villains, and a boatload of OSHA violations, resulting in a fun-filled and fast-paced adventure of new beginnings and electric endings.

This is the first book in the Her Super Harem Series. Each book will focus on a different main character, but each of the main characters will make appearances in the other books as well.
more
Amazon Other stores
Bookmark  Rate:

'Lucky Strike' is tagged as:

All books by Catherine Banks  ❯