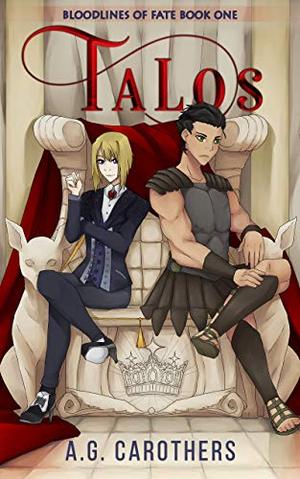 The Age of Man has passed, and a new age is upon the Earth. An age of magic and technology ruled by the supernatural beings that once hid amongst humanity has begun.

Talos - Vampyr King, Supernatural Council Member, and Despiser of Humans. Fate has a surprise up their sleeve for him.

Bayne - Raised by the human resistance, Would-be Assassin, and Despiser of Supernatural Beings. He's ready to sacrifice himself to kill his enemy.

Bayne is thrust into a world he thinks he knows but quickly discovers his whole life has been built on lies. Talos, perfectly happy ruling his corner of the world, is faced with an unexpected and unwelcome change that comes with the mate chosen by Fate. Together they must discover how to live and, in the end, love one another. But will Fate have more in store for them than just learning to love the species they hate?

Bloodlines of Fate is a new urban fantasy series set in a world destroyed by humans and resurrected by supernatural beings. Fate has many plans for the vampires, fae, unicorns, therianthropes, and humans of this new world. While their mates may be fated, love isn't that easy.

This book contains depictions of gladiatorial combat, snarky fem twinks who will cut you, kings in stilettos, and awkward heats with a pinch of daddy kink.

Talos is part one of a two part story arch. It does end in an HFN with a HEA tied into the second part. This is a type of omegaverse with mpreg.
more
Amazon Other stores
Bookmark  Rate:

'Talos' is tagged as:

The 'Bloodlines of Fate' series

All books by A.G. Carothers  ❯

Buy 'Talos' from the following stores: