Seductive Silence (Mistress in the Making #1) 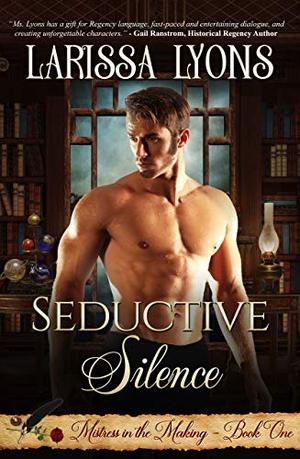 Pestered by a persistent stammer, a Regency lord must find a way to woo his new mistress without words. He just hopes she can hear what’s in his heart.

Lord Tremayne has a problem. He stammers like a fool—at least that’s what he learned from his father’s constant criticism and punishing hand. Daniel now hides his troubles, limiting his speech and getting by with a few close friends. His well-fought privacy is all for naught when he goes looking for a new mistress and finds a delightful young woman who makes him, of all people, want to spout poetry. He thought he had a problem before? Avoiding meaningless dinner prattle is nothing compared to the challenge of winning the heart of his new lady lust.

Recently widowed and increasingly poor, Thea’s been reduced to sharing her rented room with rodents and arguing over every morsel (the mice usually win). When a friend suggests an alliance of the most intimate sort, Thea’s reluctantly intrigued. But given her lackluster marriage, she doubts her ability to entice an experienced man. The considerate, if quiet, Lord Tremayne attracts her mightily, so she sets aside her misgivings. That is, until Thea realizes she’s about to break the cardinal rule of mistressing—that of falling for her new protector.
more
Amazon Other stores
Bookmark  Rate:

'Seductive Silence' is tagged as:

The 'Mistress in the Making' series