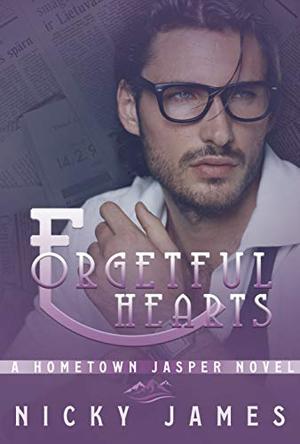 Why can't Shay remember when his nemesis became his lover?

Shay would never associate with Josiah. Not only is he his brother’s ex-best friend, but he’s arrogant, cocky, and rude. When Josiah claims they’re dating and that Shay forgave him for his past transgressions, Shay is convinced he’s lying. Except, since the accident that left him with no memory, Shay isn’t sure of anything.

The last six months are a black hole in his mind. What’s worse, Shay is convinced that whatever happened to him wasn’t an accident at all. But the only person who believes him is Josiah. Perhaps together, they can figure out the truth. Maybe retracing their steps will shake loose those missing pieces.

Can Shay put trust in the man he swore to hate? Will regaining those memories be good or bad? What if the truth was written on his heart the whole time?

Forgetful Hearts is a low angst MM romance novel with amnesia, age gap, enemies-to-lovers, and brother's ex-best friend tropes. It is part of the Hometown Jasper Series but can be read as a standalone.
more
Amazon Other stores
Bookmark  Rate:

'Forgetful Hearts' is tagged as:

All books by Nicky James  ❯