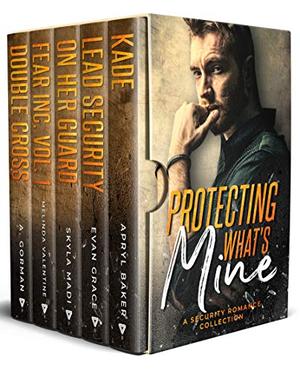 Meet the hot, dangerous, and sexy as hell alphas that will protect their women at every cost in this collection featuring five standalone Security Romance novels!

~ KADE by Apryl Baker ~
Gut-wrenching, soul-searing grief has haunted Angel Kincaid for seven years since she suffered a miscarriage. Just when she starts to think she’s come to terms with it, everything she thought she knew is cast into doubt when she comes face to face with a little boy, and every instinct tells her the child belongs to her—that he is her son.
Kade can’t shake his wife’s reaction to the boy and is determined to uncover the truth.


~ LEAD SECURITY by Evan Grace ~
I’ve spent the last several years building my company, having zero time for a social life. I preferred it that way. Until I meet my daughter’s new next-door neighbor.
Unfortunately for me, my daughter’s newfound friendship with Harley means I get to see more of her. And the more I see her, the more I want her.
But my instincts are telling me there’s a danger lurking around her, following her, waiting for the right moment to strike. And the closer I get, the more I realize there’s only one way I’ll allow any threat to get near her…and that’s over my dead body.


~ ON HER GUARD by Skyla Madi ~
I don’t know how my life got so twisted. One day, I’m working as a cash guard, shooting the tires off a stolen vehicle, and the next I’m a guard for the only daughter of high-profile mob boss, Marco Ventilli.
The twist?
I’ve already met the five-foot-four, one-hundred-and-ten-pound bombshell that is Sera Ventilli.
In fact, I’ve had her every way a man can have a woman, and if her father ever finds out, he’ll skin me alive and bury me six feet under the hot sands of Las Vegas.


~ FEAR INC. VOL. 1 by Melinda Valentine ~ Ex-cop Maxwell Fear knows all too well what can happen to a witness of a violent crime—which is why he has no choice but to protect her.
Sloane Robertson is no longer the woman he met at a dinner party or the woman he kissed at the front door. She’s a client, a job, nothing more than a person who happened to be at the wrong place at the wrong damn time.
There’s only one thing Max needs to do, one thing he’s determined to do—keep Sloane alive. Nothing and no one will stop him from doing his job…not even her.


~ DOUBLE CROSS by A. Gorman ~
Finally finding the balance she desperately needed, Jesse gains control of her father’s company. But dangers lurk in the shadows, threatening her and her family.
Even though Aedan threw himself into her life, she wouldn’t want it any other way. His presence is the one thing that makes her feel secure.
There’s a killer on the loose, always one step ahead of them, threatening the entire McCoy family. In the face of peril, Aedan plans to make Jesse his forever, and the only way anyone will take her away from him…would be over his dead body.
more
Amazon Other stores
Bookmark  Rate:

'Protecting What's Mine: A Security Romance Collection' is tagged as:

Similar books to 'Protecting What's Mine: A Security Romance Collection'

Buy 'Protecting What's Mine: A Security Romance Collection' from the following stores: