Love Him Desperate (On the Market #5) 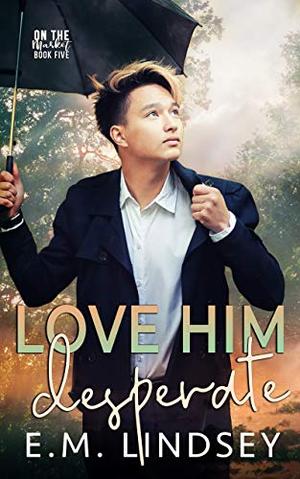 Every important thing in Dmitri Williams’ life has come and gone along the narrow roads and tall mountain peaks of Cherry Creek.

Just like most people, Dmitri wants love, but he’s not quite sure he’ll ever find it. His sexuality is confusing on a good day, and the one person he wants is the one person who can never know how he feels. Raphael is his uncle’s friend, he’s almost twenty years older, and he’s far too good for Dmitri to ever deserve him. Dmitri will suffer through his unrequited love, though, if it means keeping Raphael in his life. And yes, the pain of watching Raphael fall for someone else someday might just kill him, but knowing he’s happy will be worth it.

Raphael Meyer’s entire life was lived in spite of many things.

He walked in spite of the doctors telling his mother that he never would. He loved in spite of past heartbreak. He fell for Dmitri in spite of knowing he’s the one man Raphael can never have. But as their friendship grows, it gets harder and harder to resist Dmitri, with his unfailing strength and his ability to see the best in people. Raphael knows Dmitri deserves the truth about how he feels, but the fear of losing him is too strong, and he’s not willing to risk a lifetime of friendship for something so fleeting as falling in love.

It’s the makings of star-crossed lovers. Dmitri and Raphael want each other—desperately, impossibly, and forever, but neither of them are sure that will ever be enough. Will the universe give them a way forward, or will they spend the rest of their lives in tortured silence?

Love Him Desperate is the fifth and final book of On the Market. It contains no cheating and has an HEA.
more
Amazon Other stores
Bookmark  Rate:

'Love Him Desperate' is tagged as:

The 'On the Market' series

Similar books to 'Love Him Desperate'

All books by E.M. Lindsey  ❯

Buy 'Love Him Desperate' from the following stores: