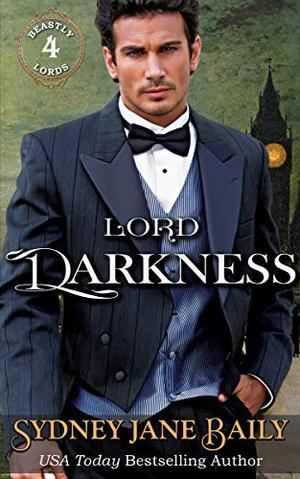 A magnificent marquess at the pinnacle of London society, darling of the ton, his world is upended in a single devastating moment—and Lord Darkness emerges!

How can he fulfill his duties when he awakens to a pitch-black world?

Lord Christopher Westing, heir to a dukedom, with his strong jaw and blue eyes, is a veritable god to the women who pursue him. What’s more, his future holds a prominent place in Parliament. Life grows even grander when he realizes the only woman for him has been right there all along. And then it all disappears!

Will she lose him so soon after he’s found her?

The esteemed but reticent Lady Jane Chatley lets her heart be captured after one extraordinary night changes everything—a kiss like nothing she has ever imagined. She would gladly belong to Lord Westing, if only she could fend off her arranged, dismal future.

An unimaginable accident and a life in tatters…

When Christopher plunges into a terrifying new world, both his sunny disposition and his will to live disappear as swiftly as the light in his eyes. With Lord Darkness pushing everyone away and Jane’s own problems growing ever more dire, how will she make him believe in what he can no longer see—before it is too late for both of them?

'Lord Darkness' is tagged as: