The Song of the Marked (Shadows and Crowns #1) 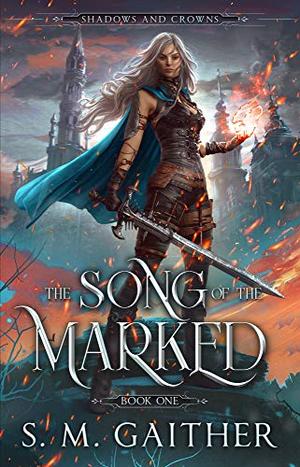 An ancient evil is stirring. The old gods are growing restless. Can she stop the coming storm?

For decades, the Kethran Empire has been plagued by a strange illness that leaches the very life and soul from its victims.

The Girl Who Survived

Casia is one of the Fade-Marked—one of the few people who caught this sickness and lived. Why she lived is a mystery even to her and the outcast crew of mercenaries she calls her family. It also makes her an intriguing target for the young, enigmatic king-emperor, who claims he wants to work alongside her to find a cure.

Unfortunately, working alongside him also means working with the handsome but infuriating captain of one of the most prestigious branches of the Kethran Army.

A Soldier With No Past

This infuriating Captain Elander also has secrets: A past that Cas can’t seem to uncover, a powerful but strange brand of magic, and a deep distrust of the very monarch that he’s sworn to serve. She feels oddly drawn to him in spite of these things...

But can she really trust him?

The Fate of an Empire

As the bodies pile up and strange monsters begin to wreak havoc throughout the realms, Cas and Elander will have to work together to protect their world whether they trust one another or not. Because one thing is clear: Something ancient and evil is stirring in the shadows of Kethra.

And the empire will not survive its full unleashing.

But how can they save a world where nothing and no one is what they seem to be— including Cas herself?

Return to the unique universe of myth and magic first introduced in the bestselling Serpents and Kings trilogy with this first book in a brand new series—or visit that world for the first time! You do not need to have read any of the Serpents and Kings books to read this one. All you need to enjoy this new series is a love of fierce heroines, epic world building, enemies-to-lovers romance, and breathtaking adventure.
more
Amazon Other stores
Bookmark  Rate:

'The Song of the Marked' is tagged as:

The 'Shadows and Crowns' series

Similar books to 'The Song of the Marked'

More books like 'The Song of the Marked'   ❯

All books by S.M. Gaither  ❯

Buy 'The Song of the Marked' from the following stores: