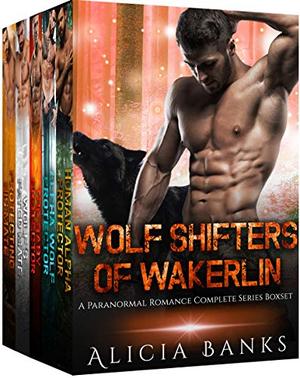 Collection of Five Amazing Stories which are Full of Action, Romance, Mystery, Surprises and a Little Magic.
Five Seductive Alphas and their Fated Mates, just to make you sink in the shifter world.


Book1: Human Alpha Protector
Brandon Scott has been all I need since I saw him naked, the very first day we met.
After seeing his tanned body, with those bulging muscles, I want him so badly.
He makes me crazy and I am getting obsessed.
His eyes can melt any woman’s heart.
I’ve never felt like this in my entire life.
I know he is not a human.
He’s been following me since my childhood and I had no idea.
He says he can not fall in love with a human.
It is against the rules of his pack.
Who cares? I am stubborn.
I can’t resist this sexy creature roaming around me.
My body craves his touch.
Now I have to share a cabin with him.
And I don’t know if I can trust myself with him.
I want him to do all the naughty things to me.
For how long I can keep control?

Book 2: Alpha Wolf Protector
What would you do if you ever fell in love with a man who is a wolf shifter?
That alpha wolf didn’t only touch my body that night but he touched my soul too.
I yearn for his touch.
His touch is comforting and hot at the same time.
He makes me feel young and beautiful again.
And I can do nothing but give in.
But…
He is, danger and risk.
He said he is a half wolf and half human.
I have to keep my son safe.
I know he could be even a bigger threat than I have imagined.
But why am I dying to get closer?

Book 3: The Baby Protector
She had been shunned and ignored by her own fellow wolves.
And she deserves this.
Why?
Because she is a daughter of a traitor, and my biggest enemy.
She doesn’t deserve to be in the pack.
I was left an orphan at a young age, only because of her father.
She has perfect curves and most attractive woman.
But... Seeing her face, is the last thing I want.
She has now invited the biggest trouble, just like her father.
She wants to protect the enemy, a human pup.
It is a complete danger and against the rules of the pack.
As a leader I need to protect my pack.
Can you even imagine, who is helping her with this?

Book 4: Wolf's Fated Mate
What would you do if you get to know that most annoying, loud, noisy and egoistic member of the pack is chosen as your mate?
This is torturous.
And soul mates are not even real.
Right?
I wished I could deny it, but I couldn’t.
I was attracted to him.
He attracted almost every woman in the pack.
His effect stayed on me until he opened his mouth.
I pitied the girl who would end up being his mate.
It became painfully obvious that he was an egoistic jerk.
He is so full of himself and never stops bragging.
All my focus is to be the best warrior of the pack.
But everything shattered.
I never knew, the girl I always pitied is me.
He is the exact opposite of the mate I want.
would never get another mate in this life.
But rejecting him is the only option.

Book 5: Protecting His Mate
I was living my dream life, away from my pack.
I have been traveling the world, experiencing human life.
And I ran into two gorgeous men.
My life made sense when I met them.
I bet you can’t resist them.
They have alpha-like personalities.
My human wants Eric but the wolf inside me yearns for Antoine.
They are completely unaware of my werewolf identity.
And I didn’t dare to reveal this secret.


Happy Ever After Stories with No Cheating, No Cliffhangers!
Adults Only!
more
Amazon Other stores
Bookmark  Rate:

All books by Alicia Banks  ❯