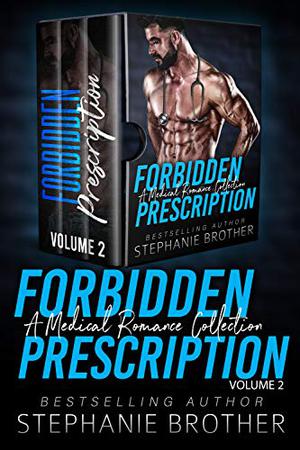 Have you had the second dose of your forbidden prescription yet?
Who will you choose this time?
These incredible doctors will have you coming back in for more.

Forbidden Prescription 4
When Ariana’s stalker ex of over 10 years comes back in town looking for her, she asks her doctor, Daniel, to pretend to be her husband to get her ex to think she’s not available anymore. But they end up together, which could lose his license! All of a sudden it is scandal after scandal that is driving Ariana and Daniel apart, as well as causing tension with their families. But they find out Ariana is carrying Daniel’s baby, making their situation a lot more difficult…

Forbidden Prescription 5
Tabitha wants to get plastic surgery done to get some better job offers but after meeting the plastic surgeon, finds out that it costs way more than she can afford. But Then she ends up meeting him at a bar and one thing leads to another. Their relationship goes more than just a one night stand. The only problem is her mother is about to marry his father! It just got a lot more complicated.

Forbidden Prescription 6
She was the intern. He was her attending doctor and boss. She was only supposed to be his fake girlfriend at the fundraiser. But their plans went out the window once they were alone together. Now they have to hide their relationship from the hospital administration, her roommate, and his father. But his father and her mother are hitting it off, so how are they going to handle becoming family?
more
Amazon Other stores
Bookmark  Rate:

All books by Stephanie Brother  ❯