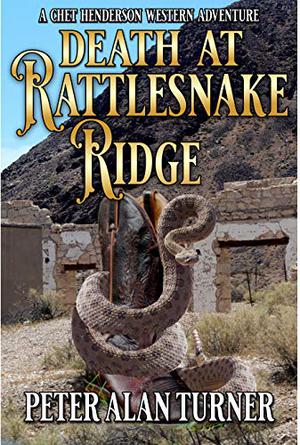 This is the third adventure in the ‘Chet Henderson: Texas Ranger Adventure' series from Peter Alan Turner! This is action, drama and gunplay all the way from one of the finest Western storytellers of today!

Chet Henderson, his relationship with Jenny crumbling, stripped of his Texas Ranger’s badge and stung by his failure to find the assassin Kurt Fox, becomes a bounty hunter. Henderson takes out his rage and frustration on every outlaw he captures, earning him a reputation as a cruel and dangerous man. In his pursuit of a wanted man, Chet wanders into Rattlesnake Ridge, a ghost town that has been taken over by outlaws. Held prisoner by the outlaws, he is unable to stop Fox from returning and kidnapping Jenny for the second time.

Will Henderson escape from Rattlesnake Ridge? Will he save Jenny and finally bring Kurt Fox to justice? Will Captain Valenti return Chet's Texas Ranger badge? In a mad chase across the Texas plains, tragedy strikes when Chet finally faces Kurt Fox one last time!

Grab your copy today and ride with a Texas ranger who means BUSINESS!

'Death On Rattlesnake Ridge: A Western Acventure' is tagged as:

Similar books to 'Death On Rattlesnake Ridge: A Western Acventure'

Buy 'Death On Rattlesnake Ridge: A Western Acventure' from the following stores: