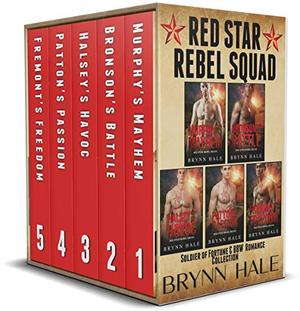 The Red ★ Rebel Squad Collection are fast-paced, sweet and steamy short stories of ex-military men turned contract for hire and the confident and sassy women who can live without the complications of a relationship but will find they can't live without the love.

Murphy- Book 1
He's put his life on hold. She's put his memory behind her. But when he comes back from the dead, can their love be resurrected, too?
Murphy
Five years ago, I died. At least that's what my family thinks. That's what Luna Malone thinks and maybe it's for the best. But has she moved on?
Luna
I was fine. I was moving on. And then I think I see him at the bookstore. And then at the coffeehouse. And then...across the street. He thinks with his training he can handle any situation--let's find out!

Bronson-Book 2
He’s never looked back. She’s never looked forward. But when he’s hurt in a covert operation, can he count on her again?
Bronson
I watched from a distance through a scope as they lowered the casket into the vault. I cursed myself as she crumbled to the ground when everyone was gone. I never stopped loving her. I’m going to find out if she feels the same.
Neveah
I opened the door and realized the last five years were a lie. His life is a lie. And I don’t tolerate liars—he knows this. If he wants back into my life…he’ll need to bring not only his best moves, but also the truth. The latter will be the harder for him.

Halsey- Book 3
He’s hurting but he took an oath to never tell anyone why. She heals broken people, but Halsey’s a deep kind of broken that scares her. Could Dharma be the cure for what’s ailing him or will they break each other until the pieces can’t be put back together?
Halsey
What do you do when someone wants you dead, but they already killed you? I don’t think I can do what she’s asking me to, but I’m going to do what I always do, buckle down and get the mission done.
Dharma
I can see emotions in his eyes, but it isn’t fear. It’s worse than fear. I won’t take anything less than the real him. Let’s see if he can soldier up.

Patton-Book 4
He’s ready to move on…maybe. She’s good being a single mom. Can they rise from the ashes of their previous lives to live and love again?
Patton
I’m done. The Red Star Rebel Squad is my past and I’m ready for the future Or am I? Can I prove that coming back from the dead isn’t dangerous for her heart?
Faith
We were fine living our small town life, with our small town happiness, and our small town dreams. He’s intriguing, handsome, and lost—but if I trust him, I wonder if we can save each other. And when the Rebels call him up, will he stay, or will he go?

Fremont-Book 5
He’s been tortured—literally. She’s overcome medical challenges that would scare the bravest soldier. Will their unkind pasts bring them together or will their ongoing fears keep them apart?
Three months ago, I was tortured for four hours. The longest hours of my life. If I stay, I’m abandoning my calling, but if I go, I’m calling it quits on us…on her. I can’t stay and watch her die.
Irie
Two months ago, I walked away from treatment and decided I was going to enjoy the end of my life my way. When an unexpected call says I have a chance at a future, will he stay or will I face the operation alone?

★Coming back from the dead takes a lot of love and a little soldiering-up. Find out if the Rebels can finish their missions to find the one.★

All books by Brynn Hale  ❯