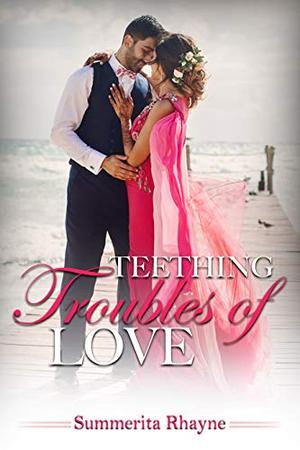 Sheena and Vinayak are doctors working in the same dental institute, but their paths would never have crossed if Sheena's deception hadn't woven a web of lies in which Vinayak became entangled. He may have his own reasons for letting her make believe go on but getting his heart involved is not on the agenda.

From a rajputana estate to a villa on an Indian Ocean island, join them in a journey of tangled deceit mixed with unwilling attraction in this page-turning romcom.
*
Excerpt:

She didn't have any luck in love. All her so-called suitors had brought was trouble on her head. And now she had got into hot water with the most eligible bachelor of the institute, the Head of Orthodontics and an aristocrat to boot.
How did she do this? Talk about messing up her chances. She had to get out of this quagmire.
He opened his mouth but before he could make yet another cutting remark, she dived in.
'You were a good choice,' she confessed. 'You never attend the parties and hardly the cultural programs. I thought you'd never catch wind of it.'
'What did you get out of it?'
'I – oh peace of mind for eight months.'
'Eight months?' He looked thunderstruck. Obviously unable to process her final blow, he sank down into his chair. 'You've been carrying out this – this masquerade for eight months?'
*
more
Amazon Other stores
Bookmark  Rate:

'Teething Troubles of Love' is tagged as:

Buy 'Teething Troubles of Love' from the following stores: