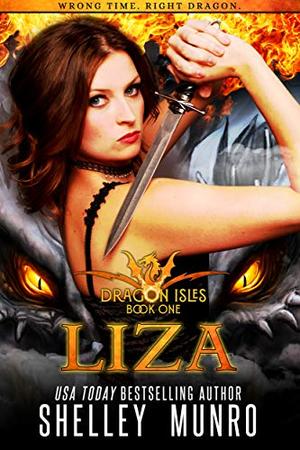 The encounter shouldn’t have occurred, and the dragon species must battle the consequences.

Elizabeth Carrington: single-mother with a daughter and an obnoxious ex who refuses to leave without a chunk of her inheritance. An aspiring writer, she glimpses the unbelievable during a research trip, and when she awakens after the resulting car crash, she isn’t in England any longer. Not that she understands this calamity, because a knock to the head has stripped her memories. She is a woman with no past and no perception of dragons or their danger to her.
Dragon shifter Leonidas, Champion of the Skies, is the youngest son, and his parents have arranged a betrothal for him with Nan, The Strongminded. He rejects this betrothal his parents insist will bring peace and cement bonds between the Dragon Isles.

Once Liza crashes into Leo’s life, everything changes. While his family, friends, and neighbors are baying for her death, instinct propels Leo to protect this attractive stranger.

Their friendship deepens from respect to love as they attempt to discover how and why they met. What they learn will rip apart the dragon world and propel the inhabitants of the Dragon Isles into an unknown future.

You will love this first book in the Dragon Isles trilogy because it introduces a courageous and sexy dragon, a feisty human battler, and a new world full of mystery, magic, and mayhem. Plus one or two dragon-caused infernos when tempers race out of control.
more
Amazon Other stores
Bookmark  Rate:

'Liza' is tagged as:

Buy 'Liza' from the following stores: