Christmas With Her Cowboy: A Holiday Romance Set 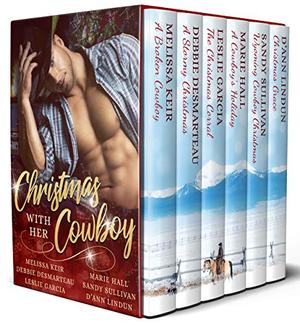 The holidays are a time to spend with loved ones and who better to spend the holiday with than a sexy cowboy. These best-selling Western Romance authors have six new novellas filled with heartwarming moments and happily ever afters. Only for a limited time!

A Broken Cowboy by Melissa Keir
Sometimes you are stronger than you believe…
A baby seemed improbable for Trey and Sara Arking until the double-blue line set their dream of parenthood within reach, but when a freak Christmas snowstorm traps them at home during the birth, will Trey be able to let go of his fears of inadequacy and save the day? Or will he lose the one person he loves more than anything—his wife?


A Stormy Christmas by Debbie Desmarteau
Kayleigh Sullivan is an independent woman with many trades. She’s worked hard to be where she is, and having a man in her life right now is not in the cards. But when she meets the handsome strong-willed cowboy that recently moved to town, she’s surprised how quickly things heat up between them. Making it even harder to concentrate on a new relationship is a jealous sheriff who is always lurking around every corner.


The Christmas Corral by Leslie P. Garcia
Friends, then lovers—Josh Reynolds and Andrea “Andi” Castellaños knew they belonged together through life. Andi’s distant parents and lack of family were made less painful through her relationship with Josh and his identical twin Marc, who became Andi’s borrowed brother as well.

Fleeing to Laredo to avoid the danger of a stalker only makes matters worse, ultimately—because Josh Reynolds might not want her any longer—but he wants the twins. No matter whether they are his or not.


A Cowboy’s Holiday by Marie Hall
When the weather outside is freezing, there’s no better place to get warm than in the arms of a cowboy.

Holly Day has come to Billing Ranch to escape the chill of city life, warm up her relationship with her boyfriend and practice her art. When that boyfriend dumps her on the side of the road in freezing temperatures, she learns that sometimes it takes a cowboy to heat a body and a heart.


Wyoming Cowboy Christmas by Sandy Sullivan
MacKenzie O’Connor, brand new veterinarian isn’t prepared to deal with a gunshot wound to a multi-million-dollar horse, but she’ll do what she must. Coming face to face with Derek Markham, cowboy billionaire and the man she’d almost had a one-night stand with, wasn’t in her plans either. Intrigue, longing, lust, and secrets. Christmas in Wyoming will change things forever.


Christmas Grace by D’Ann Lindun
Grace Holliday doesn’t expect Christmas to be special because her fiancé broke their engagement at Halloween, and she’s been nursing a broken heart ever since.

Santiago Aldana only wants one thing in Colorado—to sell his inheritance and return to Florida before the polo season is over.

Can Grace and Santiago break free of the pain of the past to see love right in front of them?
more
Amazon Other stores
Bookmark  Rate:

'Christmas With Her Cowboy: A Holiday Romance Set' is tagged as:

Similar books to 'Christmas With Her Cowboy: A Holiday Romance Set'

More books like 'Christmas With Her Cowboy: A Holiday Romance Set'   ❯

Buy 'Christmas With Her Cowboy: A Holiday Romance Set' from the following stores: