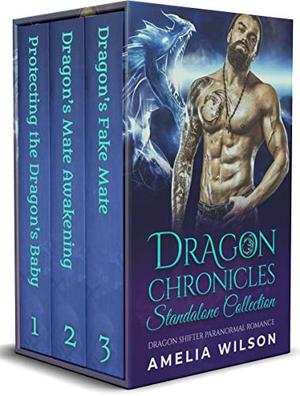 The Dragon Chronicles Steamy Paranormal Romance Collection will bring you three thrilling novels with action, supernatural suspense and a sexy couple. This romance will keep you hooked and make you wish that you were also taken away by a dragon of your own. Come for the love story. Stay for the excitement!


Book One: Protecting the Dragon's Baby

He lost everything, his mate and his child…
She lost her partner and her one chance at being a “good cop”…
But will they find what they’re looking for… with each other?

Flint was always the perfect child of an illustrious family line of fire-breathing dragons. He would never have abandoned his clan.

Until his alpha’s stupid decisions result in the loss of Flint’s mate and unborn child. But were his Alpha’s actions plain ignorance, or something more sinister?

Now Flint has hidden himself among the humans, seeking revenge. He gets his chance, but a pesky (and incredibly sexy) cop is poking her nose in his business.

Flint’s got a big choice to make: does he commit the ultimate betrayal and reveal his clan’s existence to a human...

Or does he betray his soulmate?

I'm one of the rarest and strongest dragons in the world.
I shouldn't be concerned about some mortal, but I am.
She is all I think about, all I dream about.

I know she is waiting for me to ignite her powers, even if she doesn't know it.
The question is, will she be ready for me to claim her? After all, I have waited for her for a century, and when all’s said and done, I will do anything to protect her and our legacy together.

But, I have family to contend with, and other dragons who will try to stake their claim on her as well. So if I find her, do I unlock the magic within her? Or do I let her go?

Can I protect her from herself? Will she lure me into her world? I can be strong enough to walk away.

I can protect her from a distance, I swear.

In Match Mate Club dragons are always looking for company…

Ingrid Jones would never admit she’s in love with her boss. It’s especially painful watching him find a new mate every night. But Ingrid holds a secret power, one that could finally make him hers.

Mason Amaranth has everything except for a mate. This billionaire playboy is itching to settle, and things look promising when a beautiful blonde shows up on his doorstep. But her lovely face hides deeply rooted secrets.

An unforgettable night changes the course of fate, but Mason is bound by a watertight contract. He must make a choice…but only one.

Will love or destiny prevail? Find out in this first installment of an exciting new series!