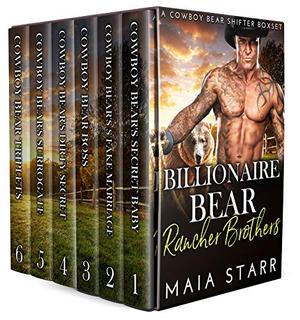 These six steamy books feature hot cowboy bear shifters and their women who would do anything to protect their hearts. But these billionaire brothers wouldn’t give up until they have claimed what’s theirs.

I moved to a ranch town to get rid of the memories of my abusive wolf shifter ex-boyfriend.
But then I did something stupid.
I fell in love with cowboy billionaire and bear shifter, Branden.
Sleeping with him was a mistake.
And keeping his secret baby? An even bigger one.

Just like my other six cowboy bear shifter brothers, owning a franchise of the ranch chain has always been my life.
But I was about to lose it all if I didn’t find a fake bride.
Turns out, not falling in love with her is harder than keeping my billions.
Especially when she’s hiding a huge secret.

I needed a head cowgirl to help me run my billion-dollar Ursa ranch.
As an alpha bear, it’s also important that I find my mate.
But my new hire plays by the rules.
I’m only her boss.
First, I need to convince her to be mine.
And then, I’ll protect her from her cruel ex-husband who is after her life.

A billionaire cowboy shifter and a relentless waitress at a local ranch town diner would make a horrible match.
That’s what I would’ve thought.
But she’s intriguing and I’ve been looking for a mate since my brothers found theirs.
So, I did what I had to do… I kidnapped her.
And then pretended to be her protector.
Not the best start to a potential new relationship, right?

I thought I’d give Edward my baby after signing up for the surrogate match service.
He’s a cowboy billionaire bear shifter.
And he’s powerful.
But I’m the woman who had been running from my abusive wolf shifter ex.
I was stupid enough to let my ex get me pregnant.
And now I’m finding out that the baby was his all along…
Will Edward’s love last after he discovers my dark truth?

Three alpha bear triplets have vowed to protect her but sharing her isn’t an option.
She needs to pick one man, even though all three of them want to claim her as their mate.
The bears within them are losing control.
They’ve always done everything together, including owning one of the franchises of Ursa ranches.
Jenny regrets being in love with them.
But how will they react when they find out that she has run away?

All books by Maia Starr  ❯