Tied and Laced (The Family Novak #6) 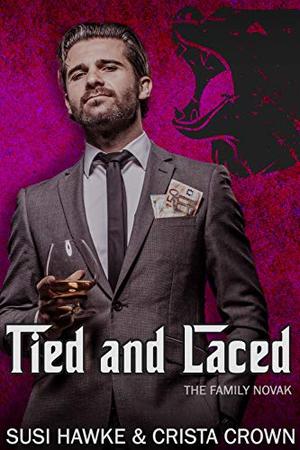 In a world where the rules are gray and the Don's word is a law unto itself, only one thing is sacred… family.

Long-time widower Don Francis Novak watched gratefully as each of his sons were blessed with a true mate. He’d never been so fortunate as to scent a fated mate. No, his had been an arranged marriage. And he’d never regretted it. How could he? The union had brought him a best friend and six wonderful boys.

The last thing he expected to find at a party for his newest grandchild was a mate. A fated mate. A literal sex kitten, who smells like sin and tastes like heaven… and just adores satin and lace. Don Novak has always been a man to know what he wants and takes it. But does he dare grab this second chance at love? His gut says yes, and his bear agrees.

Dante Hernandez has always been the type to love ‘em and leave ‘em. Get out before they left him. Deep down, he’s always believed in The One. His true mate. The one person, other than his twin, he could count on. And he wouldn’t settle for anything less. But there wasn’t any problem with having fun until then, right?

After so much time wasted by unknowingly dancing around each other, working the same jobs but not meeting, they don’t waste another second to dance with each other. They are two grown men who have lived long enough to know that when the fates give you a gift, you grab it with both hands and never let go.

Their two worlds—STAHP and the Chicago mob—collide when the don gets word of an underground omega trafficking ring. Not only does it hit all the wrong buttons for Dante, an old nemesis of the don’s seems to be involved.

Lives are at stake, and these two lovers are going to take them down—old school style.

This is the sixth book in this mpreg mafia series. Get ready for a world ruled by the Don’s iron fist, a lace and satin clad cat, and a family that stands together… no matter what. You can expect to find naughty, knotty scenes of steamy passion, along with a lot of potty-mouth language and more violence than you’re used to from us. But at its heart, you’ll still find all the fluffy mpreg feels and crazy antics you’d look for from Susi Hawke and Crista Crown.
more
Amazon Other stores
Bookmark  Rate:

'Tied and Laced' is tagged as:

The 'The Family Novak' series

Similar books to 'Tied and Laced'

Jump Up
Jump Up
(Assassin's Claws #4)

All books by Susi Hawke  ❯

Buy 'Tied and Laced' from the following stores: