The Sheik's Fruitful Infatuation (The Sheiks of the Raweer Peninsula #1) 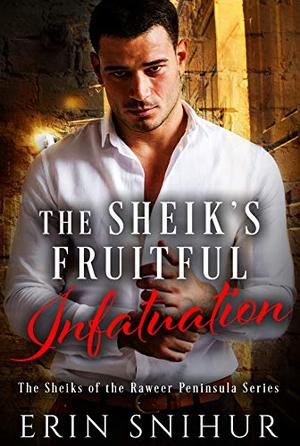 Sheik Sakeen Mejjati of the peninsula country, Sabat, first met Minnah al-Daoud at his brother's wedding. He was enthralled by the hazel eyed beauty. Even though she is married to another man and his father forbids their relationship, Sakeen cannot keep his mind from drifting to the intriguing woman.

Not wanting to ruin Minnah’s marriage like the broken one surrounding his family’s name, Sakeen struggles with his desire before deciding to do the unthinkable. Push Minnah and his desires into a deep, dark hole in his heart.

Minnah al-Daoud played her part perfectly as a wife of a well-known businessman and best friend to the Sheikha of Sanu. The only part she cannot play perfectly, is mother. According to her husband, Minnah is damaged goods. Sterile.

Trying to escape the shame of her broken marriage, Minnah attempts to throw herself into her art and tries to keep her growing desires for her best friend’s Sheik brother-in-law a tight-lipped secret.

Only problem? A visit to the Sheik’s country lands both her and Sheik Sakeen in a surprising mess. Not wanting to be tied to another man who will force her to act out her life under his rules, Minnah does the one thing she thinks will fix the entire situation.

She runs. Only, she doesn’t count on Sheik Sakeen chasing after her.

'The Sheik's Fruitful Infatuation' is tagged as:

The 'The Sheiks of the Raweer Peninsula' series

All books by Erin Snihur  ❯

Buy 'The Sheik's Fruitful Infatuation' from the following stores: