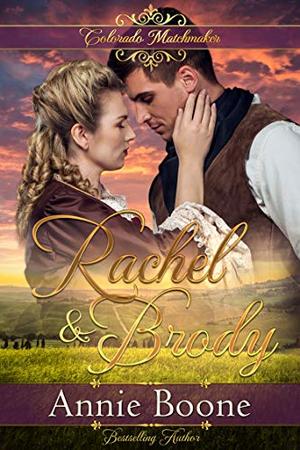 A good girl who has lost her way. A preacher's son who sees the good in all people. The attraction between them makes a scandal a sure thing.

Rachel comes to Susannah's home with a wagon full of emotional baggage and a long history of bad behavior. When she causes trouble in Susannah's house, she's almost sent away. After prayer and deep soul searching, she's allowed to stay. Rachel shares very little of her past, so those who want to help her aren't sure how they can.

Brody is a preacher's son who will soon follow in his father's footsteps. He'll take over the responsibilities of pastoring the local church and he's looking forward to that day. In the meantime, he's ministering to the people around him in every way he can. He sees the good in all people and never meets a stranger.

When Brody meets Rachel, he's bowled over by her beauty. He can't get her out of his mind. As he gets to know her, he sees the sweet person she's hidden deep inside. But his responsibilities are important and they weigh heavy on his mind. Despite his growing love for her, their union could jeopardize his future.

Is Brody strong enough to withstand the public gossip? Can Rachel bear the scrutiny of her past by people who don't really know her? Is there a future for Rachel and Brody?
more
Amazon Other stores
Bookmark  Rate:

'Rachel and Brody' is tagged as:

Similar books to 'Rachel and Brody'

Buy 'Rachel and Brody' from the following stores: