Daring Declarations: A Fun and Steamy Historical Regency (Mistress in the Making #3) 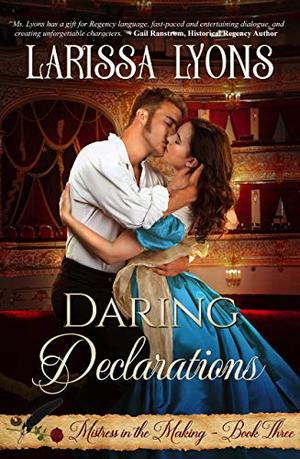 First, he showed his thoughtful generosity. Then he shared his risqué humor. Now it’s time he declares everything… If only he didn’t constantly wrestle with words!

An evening at the opera could prove Lord Tremayne’s undoing when he and his lovely new paramour cross paths with his sister and brother-in-law. Introducing one’s socially unacceptable strumpet to his stunned family is never done. But Daniel does it anyway. And it might just be the best decision he’s ever made, for Thea’s quickly become much more than a mistress—and it’s time he told her so.

Thea’s fallen under the enticing spell of her new protector. How could she not when his very presence, every kindness and written word has utterly seduced her senses? Yet her mind insists on knowing more, such as why must Lord Tremayne pummel his face in boxing matches and be so abrupt in person? Curiosity turns to baffled amazement when his sister seeks out Thea, begging advice. If that weren’t surprising enough, when circumstances conspire and Thea arrives—unannounced—at his home, she’s not only welcomed inside but confronted with more truths than she ever expected.
more
Amazon Other stores
Bookmark  Rate:

'Daring Declarations: A Fun and Steamy Historical Regency' is tagged as:

The 'Mistress in the Making' series

Buy 'Daring Declarations: A Fun and Steamy Historical Regency' from the following stores: