Knight of Grand Crossing (Knights of the Castle #5) 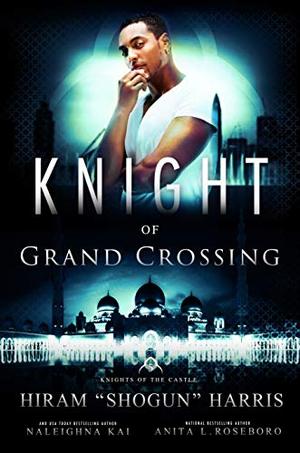 Rahm did time for a crime he didn’t commit. Now that he’s free, taking care of the three women who supported him on a hellish journey is his priority, but old enemies are waiting in the shadows.

Rahm Fosten’s dream life as a Knight of the Castle includes Marilyn Spears, who quiets the injustice of his rough past, but in his absence a new foe has infiltrated his family.

Marilyn Spears waited for many years to have someone like Rahm in her life. Now that he’s home, an unexpected twist threatens to rip him away again. As much as she loves him, she’s not willing to go where this new drama may lead.

Meanwhile, Rahm’s gift to his Aunt Alyssa brings her to Durabia, where she catches the attention of wealthy surgeon, Ahmad Maharaj. Her attendance at a private Bliss event puts her under his watchful eye, but also in the crosshairs of the worst kind of enemy. Definitely the wrong timing for the rest of the challenges Rahm is facing.

While Rahm and Marilyn navigate their romance, a deadly threat has him and the Kings of the Castle primed to keep Marilyn, Alyssa, and his family from falling prey to an adversary out for bloody revenge.


DON'T MISS the hot new standalone series, Knights of the Castle. The Kings of the Castle made them family, but the Knights will transform the world.


Did you miss The Kings of the Castle? "They are so expertly crafted and flow so well between each of the books, it’s hard to tell each is crafted by a different author. Very well done!" - Lori H.., Goodreads


ABOUT THE KINGS OF THE CASTLE SERIES
Each King book is a standalone, NO cliffhangers

USA Today, New York Times, and National Bestselling Authors work together to provide you with a world you'll never want to leave. The Castle.

Fate made them brothers, but protecting the Castle, each other, and the women they love, will make them Kings. Their combined efforts to find the current Castle members responsible for the attempt on their mentor’s life, is the beginning of dangerous challenges that will alter the path of their lives forever.

These powerful men, unexpectedly brought together by their pasts and current circumstances, will become a force to be reckoned with.

'Knight of Grand Crossing' is tagged as:

The 'Knights of the Castle' series

Buy 'Knight of Grand Crossing' from the following stores: