The Dove & the Darkness (Ceasefire #5) 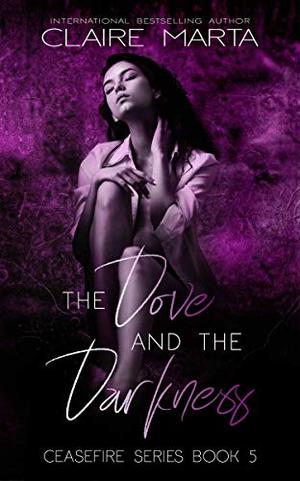 A girl was taken.
Stolen.
Caged.

Brought to a dark world to be broken and tamed. At the mercy of a masked stranger. A man who demands her body's ultimate surrender.

Ignited by his wicked sins, his depraved touch bestows freedom to her tattered wings.
What's hidden beneath the secrets and lies when only darkness will arise?

Worlds will tremble as universes collide.
War is coming to claim its prize.

Contains triggers and for an 18+ audience only.

Welcome to Ceasefire, a dark twisted world of boundless love and bitter betrayal. A place where bonds are forged through blood, magic and mayhem.
Demons, Assassins, Angels and fallen Gods are only the tip in a universe that isn't always black and white.
more
Amazon Other stores
Bookmark  Rate:

'The Dove & the Darkness' is tagged as:

Similar books to 'The Dove & the Darkness'

All books by Claire Marta  ❯

Buy 'The Dove & the Darkness' from the following stores: