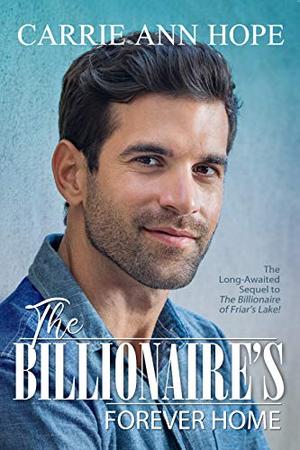 The Long-Awaited Sequel to The Billionaire of Friar's Lake!

A few months ago, billionaire Zack Bray arrived in the small mountain town of Friar’s Lake intending to do what he’s always done: find some talented people to work at one of his hugely successful companies. What he didn’t admit to himself (or anyone else) back then was that he was also looking for someone special, a woman who’d fill all the empty places in his heart—but he found her in Marcy Masterson, the manager of a local restaurant, who fell as hard and fast for Zack as he did for her.

When Zack announced that he’d like to make Friar’s Lake his home, both he and Marcy expected that to be the beginning of their happily-ever-after. But as the summer went on, things began to go off-course, and now, shortly before Labor Day, it looks as though their happy future may never happen. Zack’s board of directors is insisting that he return to Seattle full-time and forget about the struggling little town none of them has ever heard of. Marcy’s disabled father has fallen into a depression so deep that he can’t be left alone, her angry younger sister has disappeared, and the man who nearly ruined her life years ago has returned to town determined to make trouble.

Can the man everyone knows as “The Matchmaker” and the woman of his dreams find a way to solve all the problems that keep piling up around them, or will their starry-eyed relationship crumble before they can find their way to “I do”?
more
Amazon Other stores
Bookmark  Rate:

'The Billionaire's Forever Home' is tagged as:

Buy 'The Billionaire's Forever Home' from the following stores: