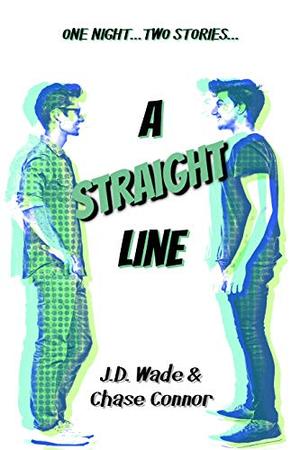 Forty years ago, Harry and Vic opened the first-ever gay bar in their rural town. Facing discrimination, prejudice, and sometimes even violence, they managed to keep the bar open in the face of adversity. A Straight Line was a place where a queer person could be themselves, find community, acceptance, and frequently, the love of their life. Everyone who became a regular at A Straight Line quickly fell in love with the owners, often referring to them as “Uncle Harry” and “Uncle Vic.”

As the world changed around them and their bar, Harry and Vic saw their rural town expand, become more accepting, and eventually embrace A Straight Line as a part of the community—just as iconic as the town hall or courthouse. The two men found themselves heroes of the community, beloved and respected for helping to usher out widespread homophobia and herald a new era of acceptance in their town. If you asked any queer person in town about A Straight Line, they’d probably tell you that it saved their life.

Now, times have changed. Harry and Vic have decided it’s time to retire and to pass the bar on to new owners. But they won’t go out without one last hurrah. Invitations have been sent out to every queer person who’s alive and attended A Straight Line’s opening—and any queer person who has passed through its doors since and ended up on its mailing list. Harry and Vic are welcoming them all to their bar for one last evening of music, dancing, food, drinks, and the sharing of life-long memories.

One attendee at Uncle Harry’s and Uncle Vic’s party is their twenty-something nephew, Russ, who has recently moved in with them. He’s not sure he believes in finding true love, nor does he understand what it means to create an LGBTQ+ family. However, once the elder gays share their wisdom, and he notices a dark-haired stranger at the party, maybe Russ will change his mind?
more
Amazon Other stores
Bookmark  Rate:

'A Straight Line' is tagged as:

Similar books to 'A Straight Line'

Buy 'A Straight Line' from the following stores: