Texas Trouble In Mind: A Texas Jack Western Books One, Two And Three 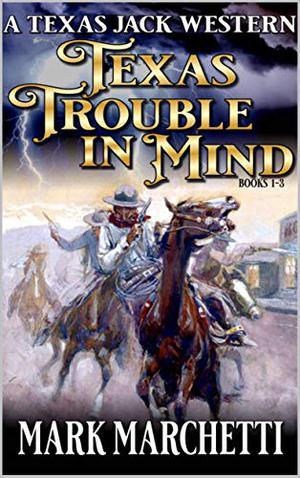 The first three novels in the “Texas Jack Western” series are now available together—for the first time! All the action, all the adventure—uninterrupted and filled to the brim with gunplay, bravery and rip-roaring Western excitement!

When Jack McKenna left at fifteen years old to fight in the war, he wasn't fighting for the South or for slavery, he was fighting for Texas. He was fighting for what Texas represented to his family. Texas was a place where a man's dreams could come true, provided he was willing to work hard, live through some adversity, and have a little luck. Jack had become a legendary hero during the war, known by both sides as 'Texas Jack.’ He was a hero to the Confederacy but considered a war criminal by many in the North. It was ten years after the war ended before he came back home to Filo, Texas. Rumors were rampant about where he had been and what he had done for those ten years. He was reported to be a hired killer, a gunman and train robber, but most believed he was dead. He returns to a Texas suffering through the hard times of post-war reconstruction. Northern land grabbers, carpetbaggers, and Indian wars were just some of the problems on the Texas frontier. Wanting only to finally return home and put the war behind him, Jack finds that trouble is waiting... and putting the war and his reputation behind him will not be easy.

Grab the first three books in this spellbinding series and enjoy a fast-paced Western series that will keep you on the edge of your seat.

'Texas Trouble In Mind: A Texas Jack Western Books One, Two And Three' is tagged as:

Similar books to 'Texas Trouble In Mind: A Texas Jack Western Books One, Two And Three'

All books by Mark Marchetti  ❯

Buy 'Texas Trouble In Mind: A Texas Jack Western Books One, Two And Three' from the following stores: